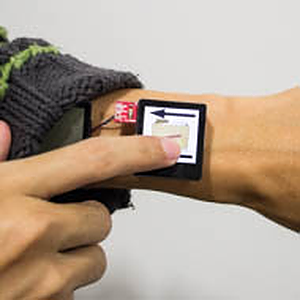 On-body displays transform the human skin into an interactive surface, enabling in-situ access to digital contents and leveraging human physiology for interaction. On-body displays stand in the tradition of static body augmentations, like tattoos and nail polish, but enhance them by interactive input and visual output. In this project, we focus on the human hand and forearm – a well-visible area that supports many postures and plays a paramount role in interaction with physical objects and surfaces.

Recent technical advances allow traditional wristwatches to be equipped with high processing power. Not only do they allow for glancing at the time, but they also allow users to interact with digital information. However, the display space is very limited. Extending the screen to cover the entire forearm is promising. It allows the display to be worn similarly to a wristwatch while providing a large display surface. In this paper we present the design space of a display-augmented forearm, focusing on two specific properties of the forearm: its hybrid nature as a private and a public display surface and the way clothing influences information display. We show a wearable prototypical implementation along with interactions that instantiate the design space: sleeve-store, sleeve-zoom, public forearm display and interactive tattoo.

Humans are mostly using their fingers to interact with their environment. Our fingertips have fine motor skills and allow us to touch, grasp, and manipulate physical objects. Fingernail Displays are tiny displays on the fingernails, right above the fingertips. They are inspired by nail polish, a well-accepted form of body augmentation, and allow dynamic visual output and interaction. This output can be used as a standalone device for always-at-hand, fast micro-interactions; it can also be used in combination with a larger touch display, where it helps avoid fat-finger problems and supports mid-air gesture input; in combination with physical objects, it provides an in-situ display to show interaction possibilities while grasping the object.